A Brief History of the AKMG

AKMG - A Brief History of the Association of Kerala Medical Graduates

Physicians from Kerala started arriving in the U.S. and Canada for the first time in the late 1950s. Dr. Indira Kartha, from Trivandrum Medical College, was the first one to land in the US. "In 1959, there were only 5 of us 'pioneers' in North America – Indira Kartha, K S Gokulanathan, E. A. Thomas, T. M. Paul, and K. P. George," wrote Dr. Gokulanathan, the first President of AKMG, in one of his reflections. That was also a time of great hardships and uncertainties for the newcomers having to establish themselves in a new country, pass the required examinations, get selected for fellowships and academic positions, and start a new practice—all the time battling homesickness. In essence, the pioneers were finding their way in the American soil.

By the 1970's, each major city in this country could boast many Malayali physicians. However, the idea of having an Alumni organization came up only in the late 70's. On December 22, 1979, Drs. Vijayashankar, P. S. Venkitachalam (who became Venkit S. Iyer later) and C. S. Pitchumoni formed an Ad Hoc Committee and decided to contact as many Kerala alumni in USA and Canada to form an Association. And on May 24, 1980 a nationwide meeting of the alumni – essentially our first convention – was held at the Bombay Palace in New York. The members present on that occasion formally inaugurated "The Alumni Association of Kerala State Medical Colleges in North America" and the following were selected as the office bearers.

At the beginning, rounding up and enlisting the many physicians stretched all over the USA and Canada in the newly formed association was quite a challenge. Communication was limited to phone calls and letters and hence the initial growth was slow. In 1984, the name of the association was officially changed to Association of Kerala Medical Graduates (AKMG) and registered as a domestic non-profit entity in Michigan by Dr. K.C. R. Nair, President 1984 -1985.

Dr. E. Enas, who became the president in 1985, did an extraordinary service to AKMG by galvanizing its growth with a spectacular increase in membership. And we were able to hold our first full scale convention in Orlando, FL in 1986 that included for the first time a Continuing Medical Education (CME) program, youth program and final day gala banquet and variety entertainment – all these were to become the standard for the subsequent conventions. The future had clearly arrived.

Since the landmark first convention, the growth of AKMG has been phenomenal with a steady increase in its membership, successful annual conventions that included CME and entertainment programs, and regular interactive seminars and educational programs with Kerala Medical Colleges. About this time "AKMG Reporter," the official magazine, made its first appearance under the editorship of Dr George Thomas and has since then remained the voice of AKMG. Soon, AKMG chapters were established in UK and Middle East. And in 2004 we celebrated the much coveted and cherished landmark, the Silver Jubilee of AKMG.

Because of its outstanding accomplishments, AKMG has received much admiration and respect from other alumni associations in America including American Association of Physicians of Indian origin (AAPI). Many leaders from AKMG ranks have held prominent positions in AAPI – Drs: George Thomas and Narendra Kumar as Presidents, Dr. Enas A. Enas as Chair, Board of Trustees and Treasurer, Dr. A. Amanullah and Dr. M. P. Ravindra Nathan as Editor –in – Chief of AAPI Journal and Trustees, Dr Aravind Pillai as Chair, Board of Trustees, Drs Radha Menon and Prem Menon as members of national committees and Dr Thomas Alapatt, President, AAPI Chapter of New York and New Jersey.

With the publication of 'Archives of AKMG,' a coffee table volume with pictorial essays – an exhaustively researched and meticulously documented book about the evolution and growth of AKMG, edited by six of the past presidents – another significant milestone was achieved. It was officially released at the Detroit Convention 2012 by the AMA President Dr. Jeremy A. Lazarus. 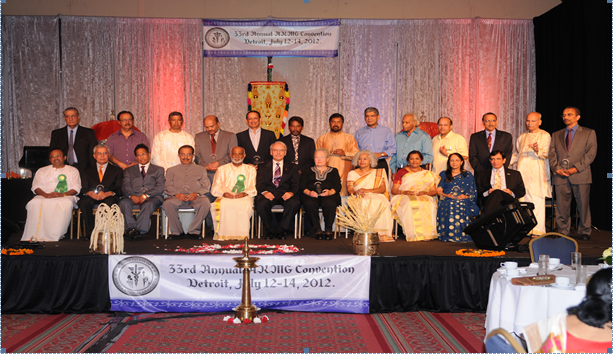 Release of Archives of AKMG – All the past presidents (up to 2012) with AMA President Dr. J. Lazarus

AKMG can rightfully claim a number of stellar achievements that include a very active Charitable Division with successful completion numerous worthy projects in Kerala and USA under its belt. Our most significant achievement was the construction and operation of the Learning Research Centers (LRC) in all the Government Medical Colleges in Kerala.

With the establishment of AKMG chapters in UK, UAE and Australia and ongoing communication and joined activities with Kerala Medical Colleges including multiple CME programs in Kerala, the dream of a Global AKMG is very close to reality. At the time of this writing AKMG has just celebrated its 36th convention and has become a major presence amidst the American physicians. All Kerala immigrant physicians who found the time, energy, and purpose to organize themselves into a unique and successful association – AKMG – definitely deserve our applause.

In reflecting and writing on the evolution and establishment of AKMG and the way it has touched our lives, I have tried to find the right tone to express my thoughts as a founding member and past president. The test of any association is its endurance through time. On that account, AKMG formed in 1980 has stood the test of time and has maintained its relevance. Today, the association continues its progress with a steady increase in membership and serving the educational, cultural and social needs of the many medical graduates of Kerala heritage stretched all over the US and Canada. Now our second generation medical graduates are also joining the association. Overall, the future of AKMG is in safe hands and we can expect continued growth. 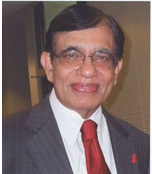